The report is based on surveys sampling 30,000 Chinese residents older than six. Half are landline users and half mobile phone users, from all of China’s administrative regions.

Read below for an overview of the report and the major take-outs that I believe are important for digital marketing in China. 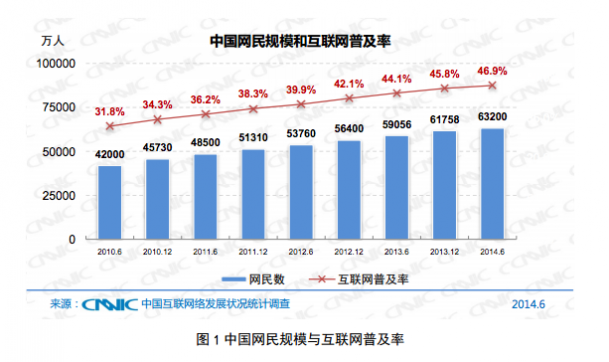 It’s clear that there is still room for the internet population to grow in China, but the rate of growth is starting to slow down. 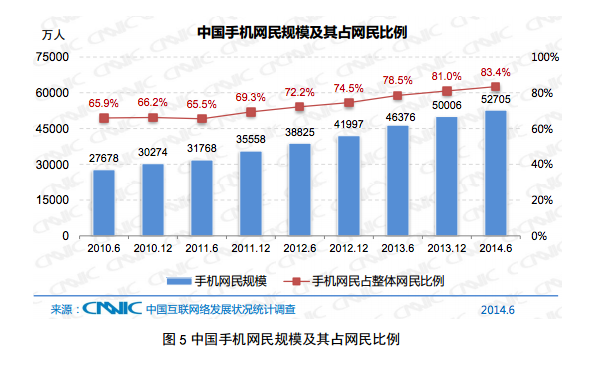 Mobile netizens increased by 5% to 527 million. The number of Chinese web users who use a mobile device to connect to the internet increased by 2.4%.

This reiterates the current trend in the Chinese digital marketing sphere, and highlights many brands desire to implement and strengthen a solid mobile strategy. 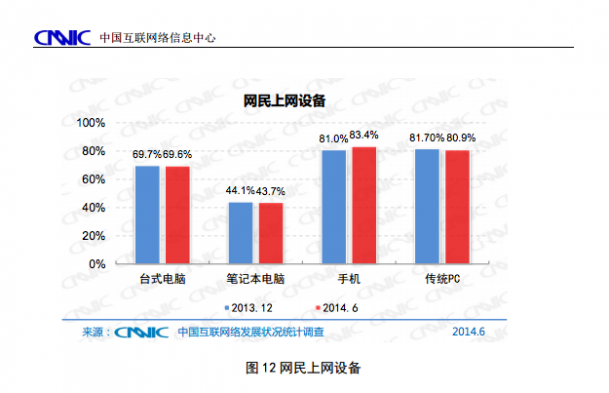 This is reflected in the fact that desktop usage remained about the same at 69.9% and laptop usage dropped 0.4 percentage points to 43.7%.

Chinese web users cemented their reputation as heavy users of the internet.

Every week Chinese netizens spend an average of 25.9 hours online, an increase of 0.9 hours compared to December 2013.

When compared to a year ago the increase in time spent online is 4.2 hours, much bigger than the increase between June 2012 and June 2013. This was a meagre 1.8 hours increase.

I guess the obvious question here is what do netizens do when they go online? 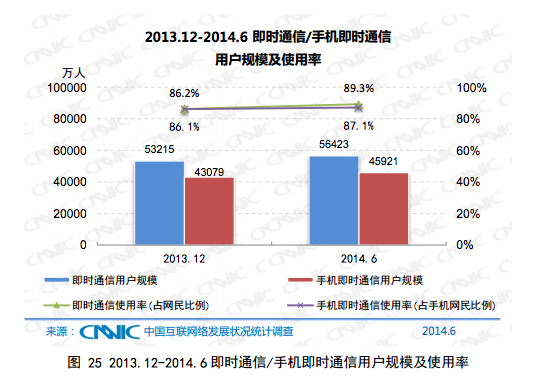 Conversely, usage on Chinese social networks went down as it did on microblogs. The number of users of social networks dropped to 257 million people on desktops and 134 million on mobile, a 4.3% and 5.5% drop respectively. 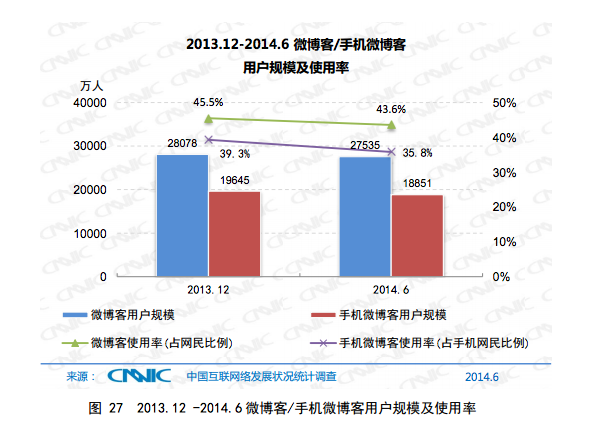 On microblogs, such as Sina Weibo, the decline in usage was less pronounced. Usage on mobile dropped by 3.5% and on desktop it dropped by 1.9% to 189 million and 275 million people respectively. 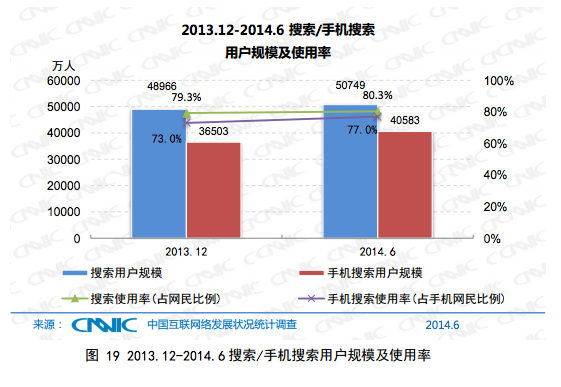 Usage of Chinese search engines rose in the six months from December 2013.

The biggest rise, again reflecting the trend, was on mobile. 406 million people accessed a mobile device to use a search engine, up from 365 million people in December 2013.

On desktop the increase was a lot smaller, a mere 1%, up to 507 million people from 490 million six months previously.

Online payment was the fastest growing category on both PC and mobile in the six months to June 2014. 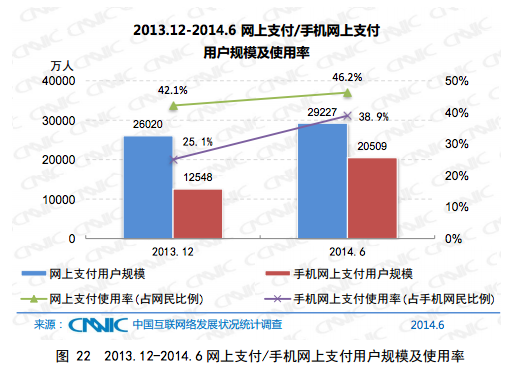 The number of netizens using mobile devices to make online payments increased to 205 million people, or by a whopping 13.8%. On desktop this increase was a more modest 4.1%. 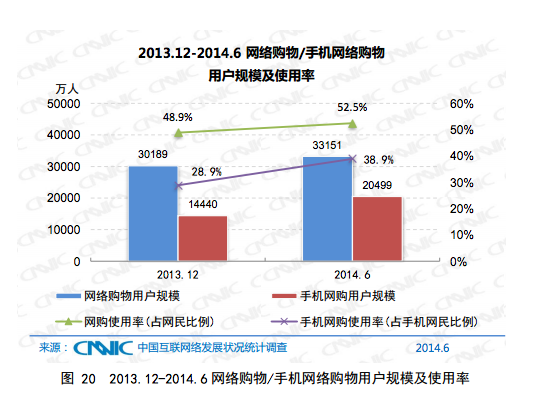 Usage of online shopping platforms increased as well. On mobile there was a 10% increase in usage and on PC there was a 3.6% increase.

Other online platforms that saw increases in usage were travel platforms and online video use. 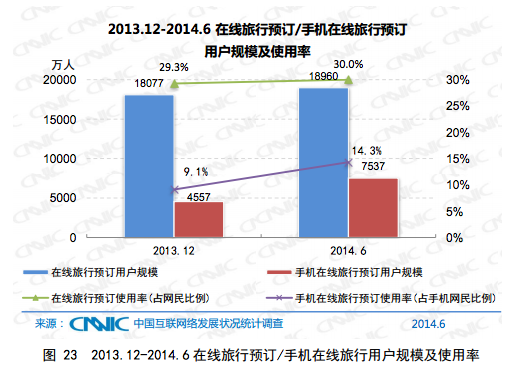 Online travel platforms, such as Ctrip, saw users on mobile increase to 75 million and on desktop increase to 190 million. 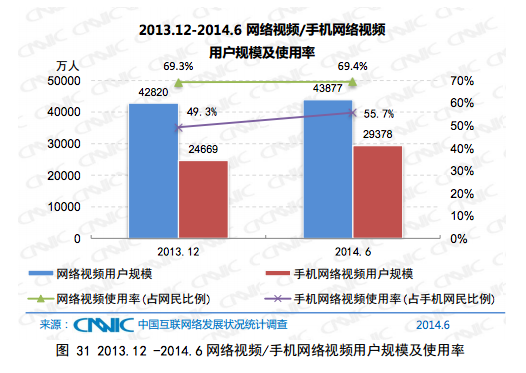 So, what can we say overall by looking at this information?

The first point is that more Chinese netizens are heading online to send instant messages, listen to music, play video games and read blogs. An increasing percentage of web users are doing this via mobile devices.

The move to mobile in China is a continuing trend. More Chinese people are going online with mobile devices than with personal computers. It’s clear that any marketing strategy in China must take this into consideration.

E-commerce is also continuing to grow strongly in China. Online retailers like Alibaba and JD.com are profiting from a growing number of people using online payment platforms.

The only declines were registered on social networking sites and microblogs.

What has become clear is that the crackdown that the Chinese government had last year on microblogs, such as Sino Weibo, has had an affect on netizens use of these platforms.

Below are some final take-outs from the report that I think are interesting to marketers.

The age range of the heaviest users of the internet in China is still 20 to 29, but this has dropped by 0.5% compared to six months previously. 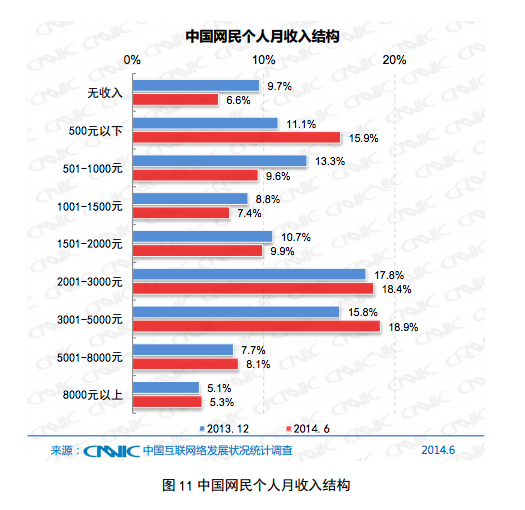 Xiaomi in particular have produced a range of affordable mobile phones that allow consumers on the lower end of the income scale to access the internet in China.

The greatest increase is in the 500 rmb and below range, where there was an increase of 4.8% of netizens going online compared to six months ago.

SUBCRIBE
Menu
This site is registered on wpml.org as a development site.