Everything you need to know about mobile wallets in China

More people now shop online and therefore tend to pay online too. This has been a steady trend in major developed countries in Europe and America. But in China the online payment market has been lagging behind until recently.

Recent years have seen Internet users in China massively rise in number. This has in turned fuelled growth in the online payment market. I’m going to look at some of the reasons why this has been a slower process in China than in places like Europe and America.

As long ago as February 2012 the landscape in China was set for mobile phone users to pay for goods with a mobile wallet. But a row between the major telecoms companies in China and the only payment settlement service, UnionPay, has slowed the process down.

Still there was a hope by the end of 2012 that 2013 would be the year that mobile payment services took off on China. Now that we have reached 2014 it’s clear that this hope was misplaced.

First I want to examine how a mobile wallet might be useful and how you can use it. The obvious answer as to why it is useful is that you don’t have to worry about carrying a wallet anymore. A mobile wallet holds your credit cards as well as loyalty cards and reward points. You can also store retail coupons, movie tickets and boarding passes. If you have an iPhone a quick look at the Passbook app gives you an insight into this.

Google Wallet is another good example of how useful this technology could be as is the Isis mobile wallet (Edit: rebranded to SoftCard). The idea is that you have everything stored in one place with the same security and fraud prevention that currently covers your credit cards. The problem with these mobile wallets is that they are only supported with specific cards so you are limited to using credit cards specific to that wallet.

From the perspective of the retailer, there is a great opportunity to build on-going long-term relationships with customers who use a mobile wallet. So these mobile wallets are more than just payment systems, but are rather a way to organise everything in your life conveniently.

There are various ways to pay with the mobile wallet too. It’s possible to use cloud-based apps, but you need to press a button or scan a code at the point-of-sale (POS). PayPal’s mobile app version requires you to enter a PIN or mobile number at POS making it less convenient.

Then there is the most convenient way to pay using near field communications (NFC). The idea is that you touch your phone at the POS and payment is made. No hassle, no fuss.

Surprisingly only 1 per cent of Americans use their smartphone to pay for anything. But in Australia and Japan the mobile wallet market is much more mature and in Europe it is developing too. In China the most popular mobile wallet is Alipay. It dominates the market without doubt.

There are some problems when it comes to NFC technology and this has contributed to the slow movement into a full online payment market in China. The telecoms companies (China Mobile, China Unicom and China Telecom) and UnionPay have argued over the technical specifications of the radio frequency used in the data transmissions: 13.56 megahertz or 2.4 gigahertz. This was finally sorted out in favour of UnionPay’s preferred 13.56 MHz.

Then there is the problem of the NFC technology itself. Apple does not add NFC to its devices. This has lead to many criticisms of the technology and some have even termed NFC: Nobody F****** Cares. It’s true that Apple’s market share in China has increased recently, but they still only have 12 per cent of the market. Even PayPal President David Marcus said NFC would fail to gain mass adoption in 2013.

In terms of how NFC is currently used it is actually really useful. I travel on the metro everyday and all I have to do is touch my travel card on the NFC tag and the money for the journey is taken from the card. This has also being used in London for years where an Oyster card can be used to travel on the extensive London Underground and Overground services.

Unlike Bluetooth or Wifi, NFC does not need an energy source and does not need to be connected via a password. I can also use the same card to travel on the bus. Imagine if all I had to do was touch my phone on the tag for all my travel needs anywhere in one country.

People also use NFC tags in their car to pre-set their in-car profile. In theory the possibilities are endless and that’s why it’s quite strange that NFC has failed to gain mass adoption. This could be about to change in China though.

According to iResearch remote mobile payment has entered a rapid growth phase. NFC payment only accounted for 3 per cent of third-party mobile payments in 2012 with mobile web payment accounting for 52 per cent of payments. 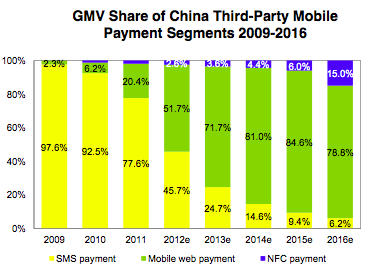 But this is predicted to rise over the coming years with 15 per cent of the online payment market coming from NFC payments at POS due to the improved POS infrastructure and the settling of the issues between the telecoms and UnionPay.

Of course there is still the problem of Apple not using NFC assisted technology in their devices, but there are ways around this such as using a NFC enabled SIM card as China mobile intend to do.

So, what is the future for mobile wallets in China? It’s hard to say and I don’t want to get in a situation where I predict the death of NFC technology only to be rebuffed as I did in the case of QR codes. But looking at the technology objectively it looks like it has a strong future.

The Chinese third-party payment market is booming and therefore it seems likely that, assuming the POS infrastructure is taken care of, mobile wallets will become mainstream within a decade. NFC technology is used extensively for travel, why not to buy your coffee?

While not making a prediction about the life or death of mobile wallets in China I will be keeping an eye on its progress during 2014.
Do you use a mobile wallet? If so which one? And what do you think about NFC technology in general? It’d be great to hear your thoughts.